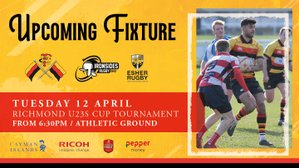 Our Richmond Under 23s are hosting a Cup Tournament at the Athletic Ground this Tuesday 12th April.

The Under 23s (formally Under 21s) are taking on Battersea Ironsides and Esher in two 40 minutes fixtures on Pitch 1. All three teams will then progress to the Under 23s Cup Finals Day on Monday 18th April (Easter Monday) at Guildford RFC.

Members and supporters are encouraged to get down to the RAG and support our Under 23s in their first rugby fixtures since Covid. Entry to the tournament is FREE and the clubhouse will OPEN from 5pm.

WE HOPE YOU ENJOY YOUR EVENING AT RICHMOND RUGBY!